Information on the loop

Description of the loop

This 62-kilometre central tour covers the home ground of Nacer and Rayane Bouhanni. It winds over the hills between the Madon and the Moselle rivers to the west of Epinal. When you leave the Maison du Vélo (The Bicycle Shop) on the lake of Bouzey, the road takes you over a succession of five hills with an accumulated elevation gain of 740 metres.

To warm up, cycle along the Vosges canal on the D460 road in the direction of Chaumousey and then Girancourt. At Girancout, take the D39, a gently undulating road which leads to Dompaire. It passes round the foot of Virine with two uphill rides over the Circourt and Derbamont hills (gradient over 7°). You will enjoy the long stretches under the cover of oak and beech trees. Keep an eye out for the signs as soon as you reach Lamerey right up to the Madonne exit on the interchange with the D166. You will come to the foot of the third ascent above Vautrincourt. This part of the road, which is exposed to all winds, takes you to the famous Harol Hill with a 17° gradient, which all cyclists in the North East of France know. At the top, stop to enjoy the 360° panorama.

To complete the tour ride down through Charmois l’Orgeuilleux to the Vosges Canal at Forges d’Uzemain. Here you will come to the highest point of the route, the ‘Côte des Salades’. That’s the fifth hill done! Return to the lake of Bouzey along a narrow winding backroad. 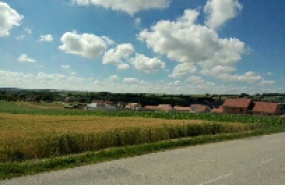 Visit the Vosges
with the application